When ex-biker-gang member Sam Childers makes the life-changing decision to go to East Africa to help repair homes destroyed by civil war, he is outraged by the unspeakable horrors faced by the region's vulnerable populace, especially the children. Ignoring the warnings of more experienced aide workers, Sam breaks ground for an orphanage where it's most needed-in the middle of territory controlled by the brutal Lord's Resistance Army, a renegade militia that forces youngsters to become soldiers before they even reach their teens. Determined to save as many as possible, he leads armed missions deep into enemy territory to retrieve kidnapped children, restoring peace to their lives-and eventually his own. 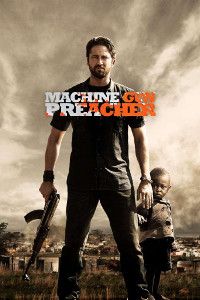 Rating:R
Restricted. Children Under 17 Require Accompanying Parent or Adult Guardian.An R-rated motion picture, in the view of the Rating Board, contains some adult material. An R-rated motion picture may include adult themes, adult activity, hard language, intense or persistent violence, sexually-oriented nudity, drug abuse or other elements, so that parents are counseled to take this rating very seriously. Children under 17 are not allowed to attend R-rated motion pictures unaccompanied by a parent or adult guardian. Parents are strongly urged to find out more about R-rated motion pictures in determining their suitability for their children. Generally, it is not appropriate for parents to bring their young children with them to R-rated motion pictures.
Country: United States
Language: English, Arabic
Released:23 September 2011
Duration: 123 min
Genres: Action/Adventure Suspense/Thriller